Behind the Build: Linda Staszak 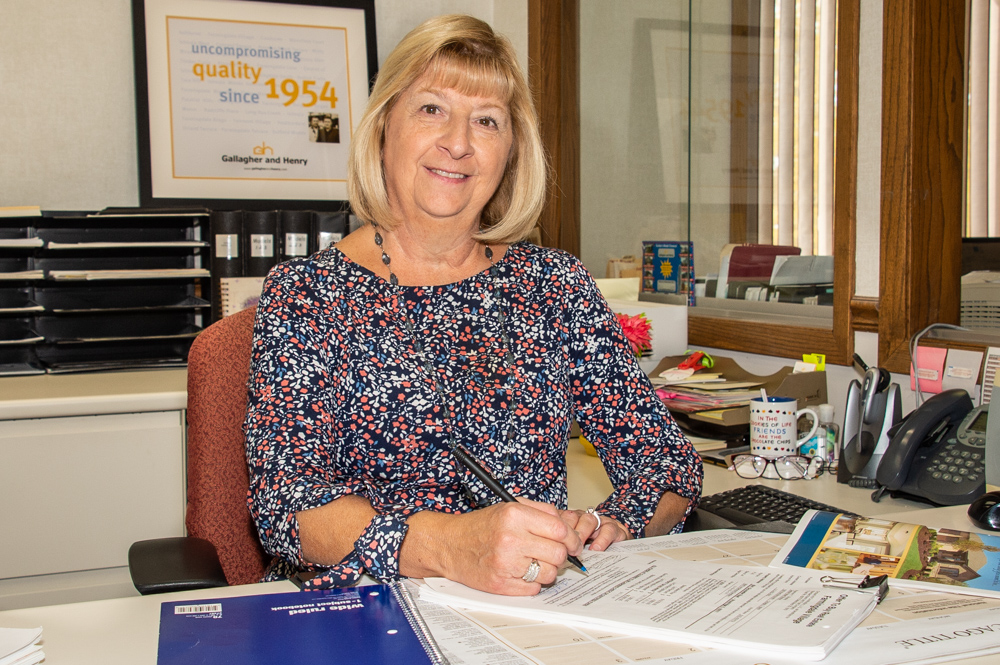 In this installment of “Behind the Build,” we spotlight Linda Staszak, Gallagher and Henry’s director of operations. Linda joined Gallagher and Henry in June 1972 and has spent much of the last five decades becoming Gallagher and Henry’s resident Swiss Army knife – a dynamic, uber-enthusiastic soul handling any task thrown her way. She adds a touch of whimsy to her emails by using Comic Sans font, devours novels, and enjoys a slice of chocolate cake every now and again.

What did you know of Gallagher and Henry when you applied for a job with the company as a soon-to-be high school graduate in 1972?

I was raised on the southwest side of Chicago and in 1966 my family moved into the Crestline community located just west of a Gallagher and Henry subdivision known as Bogan Manor. The Gallagher and Henry homes were the most desirable homes in the neighborhood, so I was naturally excited about the opportunity to work with one of the most recognized homebuilders and businesses in the area.

What position did you apply for and what were your earliest responsibilities?

I applied for a secretary/bookkeeper position and Gallagher and Henry co-founders Bob Gallagher and Dan Henry conducted my interview. Mr. Gallagher called me back that same evening and offered me the job. Truth be told, I thanked him for the offer, but told him the commute – I had interviewed at the company’s offices at 79th and Pulaski not far from my home, but was told that the company would soon be moving to a new office in Countryside – would be too far. He must have interpreted that as a negotiation maneuver, so he offered me a higher salary. After deliberating for a bit, I decided to give it a try and accepted the position. I started out typing 40-plus hours a week and taking shorthand during meetings. After a few months, the person who handled the closing document preparation took ill and I transitioned into that role.

Did you find the work and the company interesting?

Every aspect of the construction process was fascinating to me and I couldn’t absorb the information fast enough. I worked much of the time directly with Mr. Gallagher and he was an excellent mentor who shared so many lessons applicable to business and life. I consider myself an “alum” of the University of Bob Gallagher.

Having been with Gallagher and Henry nearly 50 years, does that excitement remain?

Absolutely. There’s never a dull moment and our industry has endured various cycles over the 48 years I have been with Gallagher and Henry. The most enjoyable times are when new construction experiences a surge, whether due to the economy, a new home plan, or the debut of a desirable new community. Watching a family go through the process of their dream home becoming a reality never gets old and to also see this company transition from the founders to a second-generation now putting its mark on the business has been amazing to follow.

Speaking of that longevity, what has been so neat about seeing Gallagher and Henry grow through the decades?

It’s easily been the long term relationships we have cultivated with clients. We have constructed homes for clients who were born in Gallagher and Henry homes and also built second and third homes for the same family. It’s not uncommon that previous homebuyers reconnect with us as they consider downsizing from their more traditional two-story home to one of our more open-concept ranch floor plans.

What is your current role as director of operations like?

It’s a multi-faceted position that touches a little bit of everything related to construction, sales, and marketing. I hold weekly meetings with the construction superintendents for status updates and monthly meetings with the sales staff. I process all new sales contracts, handle all residential processing like the title and closing documentation, and give the green light for construction to start. I will also research new house plans, order advertising media, and update marketing materials. It’s really a potpourri of things that make sure we are an efficient, responsive, and accessible company for our clients and our staff.

What do you think differentiates Gallagher and Henry from other local builders?

Inspired by the offerings they see on HGTV and other home improvement shows, today’s buyers really want to personalize their new home. We take the time to listen to their ideas and turn them into a reality by modifying our home plans to accommodate buyers’ requested changes. As we speak, we are designing a covered patio to accommodate a hot tub and are also working with clients who want to create an additional en suite on the first floor. We work with every client to satisfy their specific needs and wants.