In the Spotlight: Goodings Grove 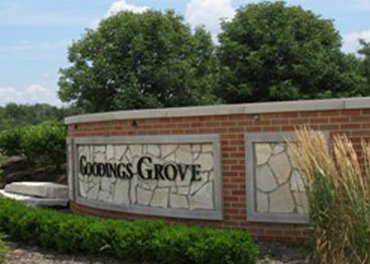 Gallagher and Henry first proposed the Goodings Grove community in 2000, one year before Homer Glen would complete its historic vote to incorporate as a village. Still the most significant new home development in the history of Homer Glen, Goodings Grove devoted 124 acres of vacant land to residential development, including more than 200 single-family homes and six four-story condominium buildings.

Goodings Grove broke ground in spring 2001 and began welcoming its first residents soon after. The community has been growing and prospering ever since, blending new residents and amenities with the ever-rising appeal of Homer Glen to make Goodings Grove one of the Southland’s most desirable addresses. Prices for new single-family homes in Goodings Grove start at $441,800.

Sister Communities: Goodings Grove is one of two Gallagher and Henry communities in Homer Glen. Its sibling community, Kingston Hills, sits approximately one mile to the south.

What’s in a Name: The name Goodings Grove derives from the area’s long-held status as a census-designated place (CDP) in northeastern Will County. CDPs are settled concentrations of population that are identifiable by name, but are not legally incorporated under the laws of a state. With the incorporation of the Village of Homer Glen in 2001, Goodings Grove shed its CDP status. In adopting the name “Goodings Grove” for its residential community, Gallagher and Henry paid homage to the area’s historic moniker.

Fast Fact: At the time it was approved for development, the entire Goodings Grove community consumed nearly 200 acres. While Gallagher and Henry dedicated 124 acres to residential development, the remaining 73 acres was earmarked for commercial space. The Goodings Grove commercial development at 143rd Street and Bell Road currently hosts a Meijer store, The Home Depot, and numerous other retail and dining establishments.

The Great Outdoors: Honoring Homer Glen’s motto of “Community and Nature … in Harmony,” the Goodings Grove community features more than 40 acres of green space, including the 3.5-acre Goodings Grove Park that opened in 2017. The nearly $500,000 project features a walking path, two playgrounds, a full basketball court, and a picnic shelter.

Happy in Homer Glen: In its most recent National Citizen Survey, more than 90 percent of Homer Glen residents rated the village as a “good” or “excellent” place to live and raise a family. Residents also gave the village stellar marks for safety, ease of travel, K-12 education, and the natural environment. Nine out of 10 residents, meanwhile, reported they would recommend living in Homer Glen to others.

A homeowner’s perspective: “Strangers have become friends and we feel like we’re on vacation. We love it here – the shopping that’s nearby, less traffic, and a peaceful feel,” Maureen G. says.