Gallagher and Henry: Our Origins 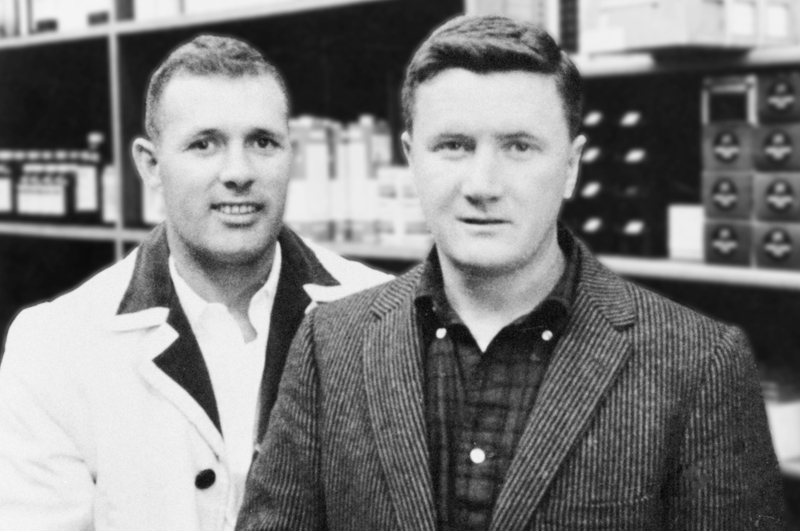 It all started on a ride to a 1953 Notre Dame football game – at least, that’s the tale etched in family lore.

On their way to see Heisman winner Johnny Lattner and the top-ranked Fighting Irish in South Bend, Bob Gallagher and his brother-in-law Dan Henry noted pent-up demand for new middle-class housing in Chicago, a city experiencing an economic and residential boom in the post-World War II era. Ignited by a shared entrepreneurial fire, Gallagher and Henry determined they could be a part of the solution and made a bold decision to enter the homebuilding business.

“Our father grew up in abject poverty, so he was motivated to be financially stable,” recalls Tim Gallagher, one of Bob’s four sons. “It was exceedingly important to him to be a good provider for our family.”

In 1954, Gallagher and Henry pulled other family members into their fledgling venture, purchased their first lots near Midway Airport, and began building their brick homes. Spurred by federal insurance for homebuilding that made it more economical for Chicago residents to trade leasing for ownership, neighborhoods on the city’s edges began to blossom with single-family homes and a housing boom took flight.

In the partners’ opening years, Gallagher, a buyer for a fruit market, and Henry, a bricklayer, maintained their existing work schedules, while devoting evenings and weekends to their upstart business. They would personally visit each home site to oversee construction and communicate with buyers, a hands-on process that would become a staple of their homebuilding firm.

“They were two workaholics,” says Michael Gallagher of his father and uncle.

Gallagher and Henry, who lived three doors away from each other in the city, made for a formidable team. Introspective and intensely focused, Gallagher refused to be bound to an office. He had a toolbox in his car trunk alongside a tape measure and rubber boots. Henry, by contrast, was more laid back and happy-go-lucky, a personality that brought balance to the partnership.

“There was a real chemistry between the two,” Tim Gallagher says. “The sum of their parts was better than the individual pieces.”

An ambitious tandem focused on building the type of quality homes they would want for their own families, the pair found quick success and their business swelled. By the 1960s, Gallagher and Henry had moved beyond the area surrounding Midway Airport. John Gallagher recalls his father scouting properties on the weekend, keeping a typewriter and contract in his car to get a jump on deals.

“He always felt buildable land was a smart play,” John Gallagher says. “Plus, you can’t be a builder in a community if you don’t have land.”

Gallagher and Henry began building homes in Chicago neighborhoods like Scottsdale and Hegewisch. A Chicago Tribune story from August 18, 1962, noted how Gallagher and Henry “was unveiling the future” with its smartly designed ranch homes in Hegewisch’s Avalon Trails community. For about $16,000, buyers could, the Tribune noted, purchase a 1,400-square foot “ranch home which emphasizes practical interior layout and use of space” as well as modern elements, such as attached garages, spacious closets, and concrete patios with sliding glass doors.

Henry assured the Tribune that Gallagher and Henry’s principal objective was “to satisfy the demand of today’s homebuyers for more house for less money.”

“We know this house has top value for the money, and we invite the home buyer’s comparison in every way,” Henry beamed to the newspaper.

By June 1964, the Tribune reported that 77 Chicago Police officers had purchased homes in Avalon Trails, a sign of the community’s strong middle-class appeal. Gallagher and Henry, meanwhile, had also introduced additional home plans to accommodate the “specifications” of growing families.

In little more than a decade, Gallagher and Henry had transformed the seedling of an idea, the simple observance of a market need, into a booming homebuilding operation.

In the beginning, Gallagher and Henry was strictly a family affair, a predictable reality for a bootstrapped residential construction business founded by a wholesale produce buyer and a bricklayer. Co-founders Bob Gallagher and Dan Henry, brother-in-laws by way of Dan’s marriage to Bob’s sister, Grace, launched the business in 1954 to capitalize on the post-war building boom.

In the earliest days, Grace Henry and Shirley Gallagher, Bob’s wife, decorated the firm’s model homes, bringing their innate sense of order and style to homes designed for Chicago’s working class. Shirley, though, added another task.

“Our mother worked for a lawyer in downtown Chicago and she’d go to City Hall on her lunch break to apply for permits,” recalls Tim Gallagher, one of Bob and Shirley’s four sons.

For Gallagher and Henry to survive and thrive, everyone had to pitch in, and that eventually included the co-founders’ children.

The four Gallagher boys, in particular, can all readily recall devoting days of their youth to the office or a construction site, learning the business and the trades, the value of a buck, and the importance of doing a job the right way. They swept houses. They cut the grass at model homes. They filed papers at the office.

“Dad would take us to the office on Saturday and always have something for you to do,” Tim Gallagher recalls. “No one got out of doing work.”

As a pre-teen, John Gallagher rode his bike to deliver donuts and coffee to members of the construction crew. Later, in the summer of 1969, John remembers getting paid $1 per hour to sweep out houses.

“And it wasn’t a dollar cash. I got taxes taken out,” John jokes.

Michael Gallagher, the youngest of the four Gallagher boys, remembers his first day working away from his father’s side. He was pulled out of his bed at the family’s Palos Heights home and driven to the company’s office in Countryside before being dropped at a homesite in Darien.

Tim Gallagher says his father, a former first lieutenant in the U.S. Army, got his sons accustomed to devoting an honest effort to the family business.

“Being around it so much, you got used to the concept that the family and the business were completely intertwined,” Tim Gallagher says. “It was a real family affair and we all learned to value that.”

While Dan Henry retired and sold his share of the company in 1978, later leaving the Chicago area before his 2011 passing at the age of 83, Bob Gallagher remained actively involved with the company into the 21st century. That gave him an opportunity to incorporate his sons into the business, to parlay those youthful lessons into a second-generation business now onto its 66th year. Today, John heads the firm his father and uncle founded, while Rob oversees the company’s fleets operations, Tim helps define the overall business strategy, and Michael shepherds Gallagher and Henry’s marketing efforts.

By the time of his death on May 13, 2005, at the age of 80, Bob Gallagher had overseen the construction of about 15,000 brick houses. Perhaps even more importantly, he had successfully positioned Gallagher and Henry to remain a healthy family business.

“Our dad’s hope was that Gallagher and Henry would be a multi-generational business and that’s why he exposed each of us to different facets of the business,” Tim Gallagher says. “He wanted us to learn about different areas, gain a variety of skills, and see where our individual talents could best help the business. The fact that Gallagher and Henry remains a family-owned and family-operated business would make him incredibly proud.”