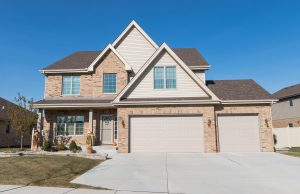 To respond to the area’s rapidly changing real estate market, Gallagher and Henry knew it had to adopt a bold and innovative strategy. “Continuing the status quo doesn’t work in today’s marketplace,” Gallagher and Henry principal John Gallagher acknowledged. “As a homebuilder, you need to be responsive to homebuyers’ must-haves. Home plans must be relevant and competitively priced.” With that recognition in mind, Gallagher and Henry unveiled its Lifestyle Series, a collection of new single-family residences built for today’s lifestyles. First came the Amberwood ranch, an architectural gem that embraced the open floor plan and distinct living spaces today’s homebuyers so desire. In mid-2012, Gallagher and Henry then introduced the Briarcliffe, a four-bedroom, two-story option that dazzled with functional layout and convenience

With the Lifestyle Series’ first two offerings, Gallagher and Henry, whose homebuilding experiences crisscrosses six decades in the Chicago area, quickly gained a new legion of fans. “We really got to know our buyers, learn about their ‘must-haves,’ and applied that directly to our home designs so that we’re building homes for how people want to live today,” Gallagher said. Contemporary design and open layouts characterize Gallagher and Henry’s Lifestyle Series, a growing collection of single-family homes designed with the needs and desires of today’s buyers in mind. The three Lifestyle Series home plans are available in Gallagher and Henry communities in Tinley Park, Homer Glen, Lemont, Palos Park, and Woodridge. Now, Gallagher and Henry presents its latest Lifestyle Series offering: the Calysta, a two-story home covering its 3,365 square feet with expansive living spaces both shared and private.

The Calysta features an expansive eatin kitchen with breakfast island and walk-in pantry that opens into a family room covering more than 250 square feet, ideal space for those who enjoy entertaining. A formal dining room, living room, powder room, and private office complete the first floor. On the second story, a master suite covers the entire rear of the home and includes a master bathroom with double vanities, soaking tub, stand-alone shower, and oversized walk-in closet. Three additional bedrooms all feature walk-in closets and 144-180 square feet, while a 300-plus square foot laundry room adds convenience and added flexibility to accommodate hobbies or exercise equipment.

“Our homebuyers have said over and over that they want space, but they want that space to be functional and to be used in a smart way,” Gallagher said. “The Calysta is the home design that brings this all together. At more than 3,300 square feet, it’s a large home, but one that uses its space wisely to give comfort and breathing room.” The Calysta is priced in the low $400,000s and joins the Amberwood and Briarcliffe as new offerings available at six Gallagher and Henry communities: Radcliffe Place in Tinley Park; Goodings Grove and Kingston Hills in Homer Glen; Covington Knolls in Lemont; Suffield Woods in Palos Park; and Farmingdale Village in Woodridge. “We’ve long prided ourselves on the fact that we build the best homes in the best communities and the Calysta continues this tradition with a contemporary home plan at a competitive price point,” Gallagher said. Launched in late 2010, the Lifestyle Series utilizes market research from both current and prospective Gallagher and Henry homeowners to drive new home design. With homebuyer insights in hand, the Lifestyle Series hits on the most desirable elements sought by today’s homebuyers, including open floor plans, three-car garages, full basements, and mudrooms. Each new Lifestyle Series home also includes Energy Star certification as well as architectural shingle roofing, Andersen low-e wood windows, high-efficiency HVAC systems, and insulated foundations.

“Today’s real estate market is a competitive one filled with smart buyers who know what they want,” Gallagher said. “We’re working hard to please them.” Gallagher called the Amberwood the perfect kick off to the Lifestyle Series. The three bedroom, two-bathroom ranch plan, which starts in the mid $300,000s, features two distinct wings to the home – one hosting the master suite and the other holding the two additional bedrooms and one bathroom – with common living areas consuming home’s center. “The Amberwood is open, luxurious, and has the modern amenities and architectural details our homebuyers have told us they want,” Gallagher said. “It showcases the new perspective we’re bringing to home design.” After the Amberwood, the Briarcliffe wooed buyers from its blueprints alone. A two story home starting in the mid $300,000s, the Briarcliffe hosts four bedrooms and 2.5 bathrooms across 2,700 square feet. “The Briarcliffe answers the call for value,” Gallagher said, pointing to the home’s three car garage, luxurious master suite, and multi-functional floor plan as the primary reasons the Briarcliffe has attracted homebuyers. Now, with the Calysta in the fold as its third Lifestyle Series home, Gallagher said his family-run operation is poised to continue its positive momentum. “Buyers responded with great enthusiasm to the Amberwood and Briarcliffe and we’re optimistic the Calysta will be just as well received,” Gallagher said.