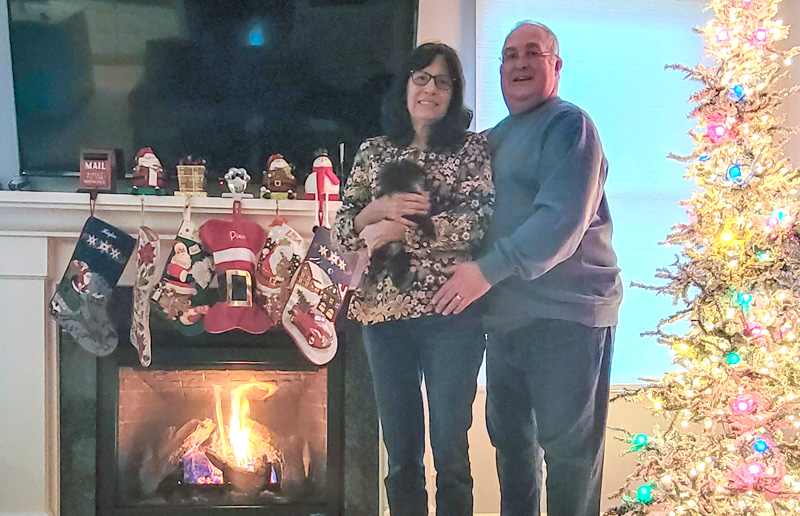 Ed and Mary Ann have their forever home.

In December 2020, the couple moved into Gallagher and Henry’s Kingston Hills community in Homer Glen. Choosing the Fremont ranch model that would allow them to age in place, Ed and Mary Ann have comfortably settled into their new home and neighborhood over the last year.

As the parents of two grown children prepare for their second Christmas in Kingston Hills, Ed discusses his and Mary Ann’s motivations to move, the custom changes they requested to personalize their home, and the process of building with Gallagher and Henry.

After selling their homes in Lemont and South Haven, Michigan, Ed and Mary Ann moved into a three-level lakeside home in Plainfield. “While the home and the land were beautiful, the house was monstrous and we actually found ourselves regretting the purchase.”

Knowing they wanted a ranch home with an open floor plan and a large lot, the couple began exploring the resale market in the southwest suburbs. “We were finding a lot of older homes and smaller lots.”

On a whim, Ed and Mary Ann visited Gallagher and Henry’s Farmingdale Village community in Woodridge. There, they saw the Fremont model and were smitten with the home’s open layout and spacious floor plan. “Everything we looked at after that, we compared to the Fremont – and nothing compared to the Fremont. When we found out we could build it in Homer Glen, that’s all we needed to hear.”

Ed and Mary Ann investigated available lots at Gallagher and Henry’s two Homer Glen communities, Kingston Hills and Goodings Grove, and quickly zeroed in on a Kingston Hills parcel surrounded by mature trees. The couple sold their Plainfield home in quick time – so quick, in fact, they had to temporarily move into their son’s basement. “We were eager to get our house built.”

Ed and Mary Ann worked alongside Gallagher and Henry sales manager Tina Plastiak to customize the Fremont plan to their needs and tastes. The couple upgraded the standard gas fireplace to one that resembled an authentic wood-burning fireplace and converted the buffet area in the kitchen into a beverage station for crafting coffee and cocktails like Ed’s famous Manhattans. They also combined the Fremont’s two islands into one mega island surrounded by seating. “That opens up the space even more and is perfect for entertaining.”

While Ed and Mary Ann had bought numerous homes before, this was their first experience with new construction. “Working with Gallagher and Henry was easy and organized. Since everything is done in stages, it never feels overwhelming. You start by picking the exterior you want before moving onto interior details. It’s smooth and streamlined.”

Last summer, a young couple exploring the neighborhood stopped Ed as he was outside his home. They inquired about the process of building with Gallagher and Henry and about living in Kingston Hills. “I had nothing but compliments to share.” That couple’s Kingston Hills home, the Briarcliffe, is now under construction about two blocks away from Ed and Mary Ann.

A year after his move into Kingston Hills, Ed calls his home and the community a “cozy and friendly place.” He and Mary Ann count some “wonderful neighbors” as friends and recently hosted family for Thanksgiving. “This is a great house to get old in and we couldn’t be happier with where we’re at.”