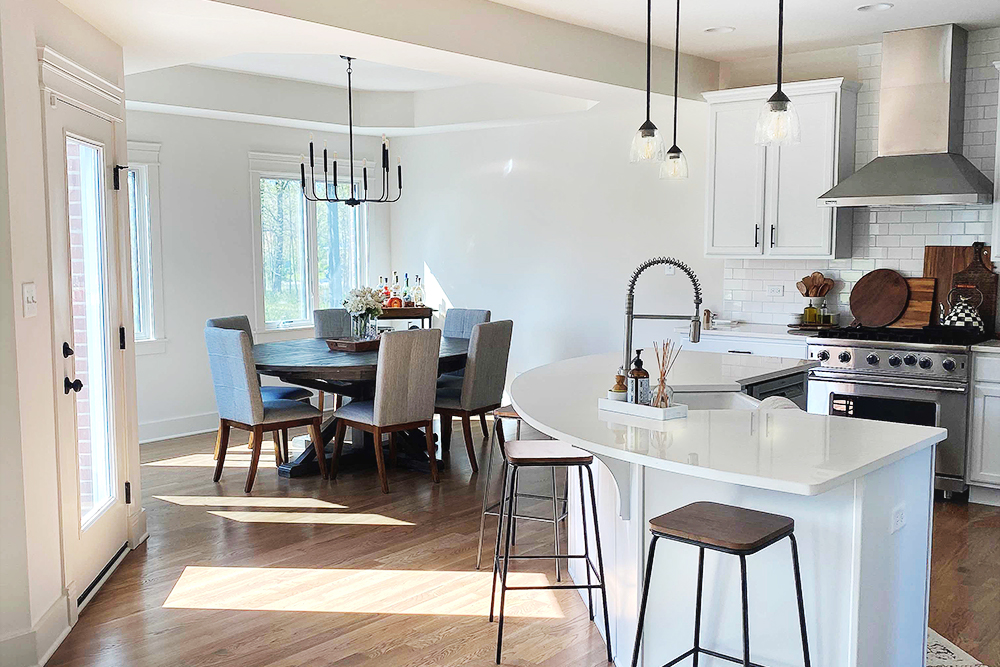 With a clear eye on what they wanted in their next home and confidence in Gallagher and Henry as a homebuilder, Sarah and Dan pegged the family-owned homebuilder to construct the couple’s new home in Woodridge’s Farmingdale Village community in 2020. Sarah discusses the couple’s hunt for a new home, choosing new construction over the resale market, and putting faith in Gallagher and Henry.

Sarah and Dan began looking for a new home in the summer of 2020. “We were outgrowing our townhome in Naperville and were eager to set deeper roots with a single-family home of our own.”

The couple began their home search by exploring the resale market. “We didn’t know exactly what we wanted, but we knew what we didn’t like. We found so many homes needing a lot of updating and the thought of living through a renovation and having to invest in that wasn’t terribly appealing.”

Still, the couple did their research. They scoured online reviews and queried family members with construction industry backgrounds. “And everything checked out. Gallagher and Henry was so highly recommended for the quality of work they do.”

A large, open kitchen was at the top the couple’s new home wish list. “Dan likes to cook and I like to bake.” The couple also wanted a basement, a large backyard, and lots of windows for natural light.

Initially drawn to the Calysta, the largest of Gallagher and Henry’s six Lifestyle Series home plans, Sarah and Dan fell in love with the Briarcliffe upon touring the model at Lemont’s Covington Knolls community. “With the open two-story foyer, the staircase, and the natural light pouring in, the Briarcliffe immediately caught our attention. Then, when we got into the kitchen and saw how it opened to the entire first floor, that really sealed the deal.”

Yet, the couple had some specific requests and wanted to explore modifications to the Briarcliffe plan. Sarah and Dan requested an extra one-foot ceiling height in the basement, a fireplace, and the addition of flagstone to the home’s front exterior. “Sandie got us pricing on those things immediately and we were able to move forward.”

Though friends warned Sarah and Dan of a complicated process when building a new home, Sarah calls her dealings with Gallagher and Henry “completely seamless” and free of stress. “I’m a second guesser by nature, but Sandie and [superintendent] Ed Holmquist were so reassuring and responsive and worked with us every step of the way. Having people who were super friendly and kind was the cherry on top of being able to build our home together.”

After selling their townhome in October, Sarah and Dan spent the next six months living with Sarah’s parents a block from their soon-to-be completed home. They visited the construction site daily and closed on the purchase March 23, 2021. “When the home was officially ours, it was actually kind of strange to have the keys all to ourselves and no one needing to lock up behind us.”

Now settled into their new home, Sarah and Dan look forward to a lifetime of making memories in Farmingdale Village. “It’s the perfect place for us to grow into.”