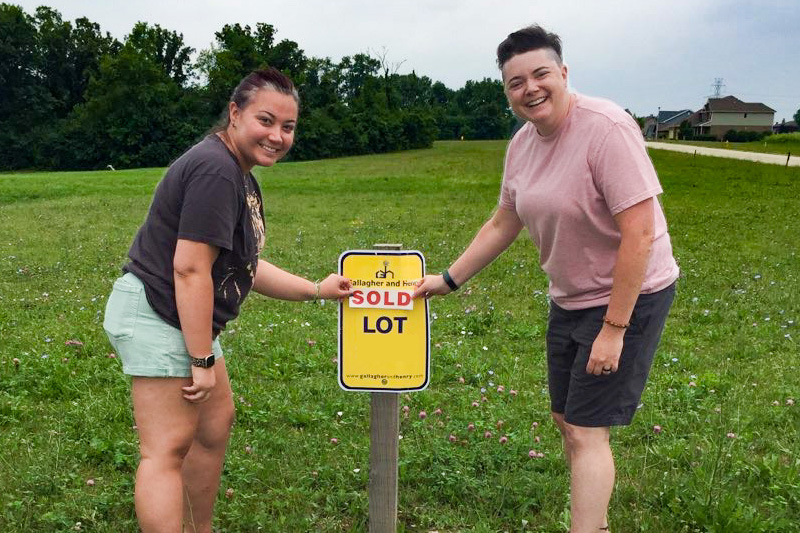 On July 17, the couple signed their contract to build a new single-family home in Homer Glen’s Kingston Hills community.

“We’ve been together 15 years and this is our next adventure together,” Lisa says. “We couldn’t be more excited.”

Changing Needs and a Chaotic Market

Eight years ago, the couple purchased a not-quite 1,000-square foot, two-bedroom condo in Crestwood. Though initially planning to live in the condo for about five years, they grew comfortable in the space until the COVID-19 pandemic made it seem as if the walls were closing in. With both Lisa and Tina working regularly from home in a professional field – counseling – where confidentiality is essential, their “once-manageable” residence became a burdensome environment.

“We needed out,” Tina says.

The couple began searching for a new home in the resale market a year ago but found a chaotic scene. Homes, even those in need of significant updating and renovations, were selling quick and well over asking. The process grew tiring and frustrating.

“Even if we found a home that checked a few of our boxes, we were still paying through the nose for it,” Lisa says. “We needed to re-evaluate and find a different end game.”

While neither Lisa nor Tina had considered new construction, the circumstances pushed them to investigate homebuilders. They were surprised to learn building new was a viable option.

“Honestly, it was 1,000 times better than settling for something else on the resale market,” Tina says.

Interested in the southwest suburbs, an area in between their respective parents, they found Gallagher and Henry’s Kingston Hills community and immediately appreciated its balance between wooded seclusion and suburban amenities, including shopping, Interstate 355, and many of the couple’s favorite restaurants.

“It’s a community in which we could feel comfortable,” Lisa says.

After carefully selecting their precise lot at Kingston Hills, Lisa and Tina then picked their home plan. They quickly eliminated ranch plans and targeted a pair of distinct two-story homes from Gallagher and Henry’s Lifestyle Series: the Briarcliffe and the Danbury. Tours of both models quickly determined a clear winner.

“The Danbury offers a beautiful floor plan, but when I walked into the Briarcliffe’s open foyer for the first time, it took my breath away,” Tina says. “I could immediately see myself coming home to a safe, cozy space.”

Lisa, meanwhile, relished the Briarcliffe’s open layout and the many windows that flooded the home with natural light. It represented a stark counter to the condo living she stood eager to escape.

“We had so few windows in our condo, it could feel like a dungeon,” she says. “The Briarcliffe was the complete opposite: a bright, refreshing home.”

With four bedrooms, Lisa and Tina can each have their own offices and still have a guest bedroom. The Briarcliffe’s second-floor laundry room, three-car garage, and luxurious master suite were also enticing features.

“We can’t wait to get into a home that will give us everything we need and more,” Tina says.

The couple is now plotting their exterior and interior selections as well as exploring different modifications to the Gallagher and Henry-supplied floor plan with the help of Kingston Hills sales associate Tina Plastiak. They are considering a full wooden staircase, extra lighting, and eliminating the walk-in closet in two bedrooms to enlarge the room and gain additional wall space.

“We both fashion ourselves interior design fans, so we’re excited to customize and build the home in our image,” Lisa says.