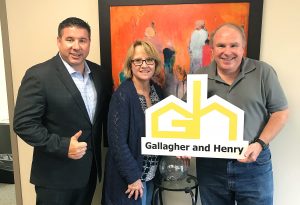 On Christmas Eve 2018, John and Joan held their first holiday gathering in their new Homer Glen home. Nearly 70 family and friends gathered in the ranch home on a cul-de-sac lot in the Kingston Hills community, the continuation of a family tradition that began decades ago in the couple’s Chicago residence.

“And it couldn’t have gone more beautifully,” Joan says. “You expect a few hiccups when you’re building a new home and settling in, but everything has been seamless.”

When John and Joan first encountered the Amberwood model home in Kingston Hills, the 2,243-square foot home’s open floor plan and thoughtful layout – the master suite sits on one side of the home’s common areas while the additional two bedrooms reside on the opposite wing – immediately impressed.

Yet, John and Joan had some specific requests of both the cosmetic and structural variety, and the couple wondered if Gallagher and Henry would accommodate their desired modifications.

The answer was a resounding yes.

“Almost everything we had questions about, Gallagher and Henry had an answer at the ready,” John says. “They were clear on prices, responsive to any of our questions and told us where we could see product and samples.”

The couple’s most significant request included turning the Amberwood’s partial basement into a full basement with above-grade windows that increased natural light and provided scenic views of the ravine situated behind the home.

Though the couple elected not to finish the basement, the utilitarian space has already served its purpose well. In addition to hosting the holiday gathering, the basement has become a wide-open space for grandchildren to play and provided additional storage. John, meanwhile, has plans to soon build a woodworking shop to accommodate one of his favorite hobbies.

John and Joan asked Gallagher and Henry to extend the media room sitting off the family room at the back of the home. While that structural change added to the media room’s square footage, it also allowed for a covered rear porch running approximately 24-feet long by 10-feet deep.

“We knew we wanted the covered patio from day one and now have a relaxing outdoor space,” Joan says, adding that she and John converted the media room into a cozy home office with French doors.

Though a fireplace might not be a high priority for many of today’s buyers, John and Joan considered it a must for their home. Throughout the first fall and winter in their new home, they used the fireplace daily.

“We turn it on with the flick of a switch and it warms the room,” Joan says. “We absolutely love it.”

A high-tech shower system in the master bath stood high on John’s wish list. Per his request, Gallagher and Henry installed a large Moen showerhead on one wall with four additional jets and a hand nozzle on another.

“I’ll sometimes turn the shower on with the mobile app before I even get out of bed in the morning,” John says. “So relaxing and worth every penny.”

Unsure of how Gallagher and Henry might handle their requested modifications, Joan calls the process of dealing with the family-owned homebuilding firm “ridiculously easy.”

“Nothing was rushed and Gallagher and Henry kept us updated throughout on both the investment and the timeline,” Joan says. “Their ability to customize our home and account for the changes we wanted has made the house even better than we expected.” 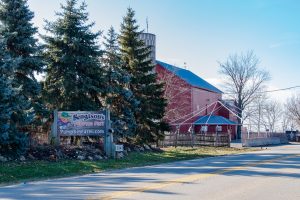 Homer Glen continues to solidify its standing as a gem of Chicago’s Southland region. Since being incorporated in 2001, the southwest suburban village of some 24,000 residents has become one of metro Chicago’s most desirable communities, providing its swelling residential population a high quality of life punctuated by award-winning schools, abundant recreational amenities, and a growing commercial scene.

In Goodings Grove and Kingston Hills, Gallagher and Henry boasts a pair of new single family home communities in this lively village.

Homer Glen sits in the northeast corner of Will County, approximately 35 miles southwest of downtown Chicago. The village covers some 22 square miles, which makes Homer Glen one of Will County’s largest municipalities. The village is connected to the greater Chicagoland area with a pair of exits along I-355 as well as convenient access to downtown Chicago via Metra Southwest service to Chicago’s Union Station.

According to the National Citizen Survey, an objective study of residents’ feelings on community livability, nine out of 10 current Homer Glen residents rated the village as a “good” or “excellent” place to live and raise a family, while 85 percent said they would recommend Homer Glen to others. Residents awarded the village particularly stellar marks for safety, ease of travel, K-12 education, and the natural environment.