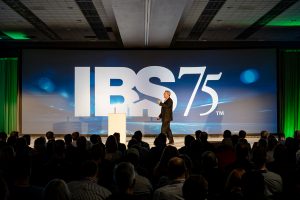 Residential builders from around the globe, including representatives from Gallagher and Henry, descended upon Las Vegas Feb. 19-21 for the annual International Builders’ Show.

The Show’s 75th anniversary edition featured the largest crowd in a decade with some 67,000 building professionals gathering information on the latest trends and innovative products in home construction and design. From established industry names like Andersen Windows and Whirlpool to connected home startups, more than 1,500 exhibitors filled 608,000 square feet at the Las Vegas Convention Center.

“By attending the International Builders’ Show, we keep up to date on the best practices and newest products available in the marketplace today. This helps us provide our homebuyers with the most relevant, current information possible and ensures we’re building the high-quality, durable homes they expect,” Gallagher and Henry principal John Gallagher says.

Some products that captured the attention of Gallagher and Henry personnel in attendance:

From Whirlpool kitchen appliances and the smart home technology available on Andersen’s 400 Series windows to WiFi connected locks from Schlage that provide remote access and other enhanced security features, digital technology for the home blanketed the Show floor.

“We’re actively investigating how to bring different smart home technologies into the home and also mindful of how these various solutions interface with the entire hub like Google or Alexa,” Gallagher and Henry director of operations Linda Staszak says.

With both its stunning design as well as its continuous push for innovative solutions, Moen always impresses. The company showed Flo by Moen, a smart home water monitoring and leak detection system that allows homeowners to monitor, control, and conserve water from their smartphone, as well as U by Moen, a smart shower technology that allows users to start, stop, and adjust a shower with their voice.

“Whether its Moen or another one of our long-time partners like Andersen, Whirlpool, or Schlage, we love seeing companies really push the innovation envelope because that enables us to offer a more and more solutions to our buyers,” Gallagher says.

The Show floor featured numerous decorative mirrors backlit with LEDs. Available in a range of shapes and finishes, these mirrors fit a diverse array of styles and add extra panache to spaces homebuyers are increasingly interested in making more stylish and luxurious than utilitarian.

“These mirrors are definitely eye catching and a bold addition to any bathroom,” Staszak says.

Heat & Glo’s Foundation Series fireplaces   won the Show’s award for Best Indoor Living Product and it’s easy to see why: the product is contemporary in its design, offers different configurations, and delivers the cozy feeling a fireplace should.

“We’re always conscious of blending design and function because that’s what today’s discerning homebuyers demand. Whether it’s a fireplace, windows, or shake siding, it’s a win-win when we can present our homebuyers options that look beautiful and perform at a high level,” Gallagher says. 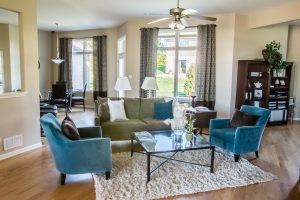 Once viewed as a pragmatic, simplistic home design lacking imagination and character, a mix of nostalgia, shifting lifestyle trends and modern spins on single-level living have propelled the ranch-style home back into national prominence. In fact, Trulia reports that the ranch is the most popular home style in 34 states, including Illinois.

“Going back 10-15 years, we’d see scattered interest in our existing ranch plans, but when we released the Amberwood, a plan we specifically designed with the desires of today’s homebuyers top of mind, we could see there was a market for ranch homes, particularly those reflecting modern lifestyles in smart, innovative ways.”

Initially gaining popularity following World War II, construction of ranch homes accelerated throughout much of the 20th century’s second half before fizzling out in the 1990s. Ranch homes became increasingly associated with tract housing and careless suburban sprawl, while two-story homes with Craftsman, Victorian or Colonial spins surged in popularity.

Today, however, the ranch is enjoying a 21st century renaissance as homebuilders like Gallagher and Henry accommodate current lifestyle needs and tastes inside the ranch’s unpretentious, enduring style.

While there’s a degree of nostalgia fueling the ranch home’s return to prominence – a good number of contemporary buyers are quite comfortable with a ranch home having grown up in one themselves – the ranch resurrection is about more than wistfulness.

To many buyers, Gallagher says, ranches represent a practical housing option, especially for those buyers who see their home as a long-term housing solution. Yet more, ranches generally lend themselves to open layouts and more casual living, which complements society’s increasing movement away from formal structures.

Driven by young families as well as Boomers who reject the multi-family model, upgraded ranch plans that pair modern architecture and amenities with the ranch home’s long-held focus on functionality continue generating buzz.
Take Gallagher and Henry’s Amberwood plan, which characterizes the modern spin some of today’s forward-thinking homebuilders are putting on ranch homes.

“With the Amberwood, we’ve hit on something very relevant for our buyers interested in single-story living, which is a home plan that is both remarkably straightforward and yet fully compatible with modern lifestyles,” Gallagher says. 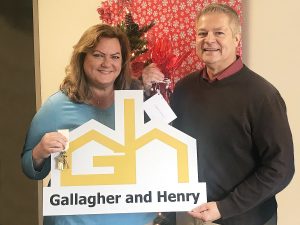 For 30 years, Greg and Adrienne lived in a Gallagher and Henry-constructed home in an unincorporated patch of Downers Grove. The couple raised their two children in that two-story residence, crafting a lifetime of memories together.

In early 2016, however, Adrienne began urging her husband to consider a move. Having undergone two knee-replacement surgeries, Adrienne yearned to simplify her life and Greg acquiesced, albeit with hesitation.

The couple investigated various options including townhomes and other new home communities before quickly zeroing in on a familiar partner in Gallagher and Henry.

“Their Amberwood plan had my eye,” Adrienne says of the ranch home from Gallagher and Henry’s Lifestyle Series.

The couple discovered that Gallagher and Henry’s hands-on, customer-centric style remained just as they remembered, though the family-owned firm had also evolved into a more cutting-edge outfit befitting modern times, particularly when it came to customizing home plans.

“I like to work with people I know and quality I can trust,” Greg says of the decision to work with Gallagher and Henry once again. “We were confident in what they could do and what they stood for.”

After selecting a lot in Woodridge’s Farmingdale Village community, about five blocks east of their longtime home in Downers Grove, the couple committed to the Amberwood and began working with Gallagher and Henry staff to customize the home, a shift from the process they experienced back in 1987.

“It was just a different era,” Adrienne allows.

This time around, though, Greg and Adrienne detailed some specific requests, including:

“And the list really goes on and on,” Greg says. “We knew what we wanted and Gallagher and Henry helped us accomplish that.”

When the couple moved into their new home on a brisk winter day in December 2018, Adrienne encountered a rush of optimism and gratitude reminiscent of what she had felt 30 years prior.

“Just like walking into our first Gallagher and Henry home back in 1988, I walked across the threshold of this one and thanked God it was mine,” she says. 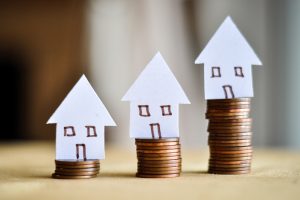 As headlines blare about rising interest rates and a potential market slowdown, one might think 2019 will be a dire one for homebuyers.

While it’s true interest rates are climbing on 30-year fixed rate mortgages, the current real estate environment remains a favorable one for buyers. Here’s why:

Yes, interest rates on 30-year fixed rate mortgages are indeed trending higher. In the final quarter of 2018, interest rates sat at 4.78 percent, according to Freddie Mac. While that 4.78 percent mark represents a more than 1 percent jump from the historically low 3.65 percent average of 2016, it is still lower than any annual rate from 1988-2009.

In the late 1980s, for instance, interest rates regularly exceeded 10 percent. In the 1990s, rates hovered around 7.5 percent. Throughout the first decade of the Millennium, rates floated near 6 percent. Against that broader context, last quarter’s 4.78 percent figure represents a comparative bargain. (Of note, rates dropped to 4.45 percent in late January, according to Freddie Mac.)

According to the January 2019 National Association of Home Builders/Wells Fargo Housing Market Index, homebuilder confidence sits in a stable place. Amid low unemployment and solid job growth, many of the nation’s homebuilders largely view 2019 with optimism.

Though homebuilders certainly face headwinds, including rising construction costs, a more confident, healthy homebuilder is one who invests in his team, his product and his buyers.

“When you have confidence in the market, it’s that much easier to push ahead and be an innovative force for your buyers,” says Gallagher and Henry principal John Gallagher.

Though home prices have been accelerating for years, prices and inventory are reaching more moderate levels. In 2019, many analysts foresee a more temperate climate prevailing.

Rather than feeling rushed and overwhelmed, a more normalized market offers homebuyers an opportunity to catch their breath and assess the market. Buyers can consider all homes that fit their budget and preferences, including new construction that arrives without the maintenance or updating costs of an existing home.

The Reality of Opportunity Cost

If rates continue to click upward, as a good number of economists predict, then those hesitant to jump into the real estate market will face an opportunity cost for that timidity.

Predictions by TransUnion and the like, of course, acknowledge rates ever-fluctuating nature. Even so, smart money sits on climbing interest rates that will prove costly for the indecisive.

“There’s a great window of opportunity for those who act now,” says Mark Zdenovec of Naperville-based Stearns Home Loans, the preferred home lender for Gallagher and Henry.