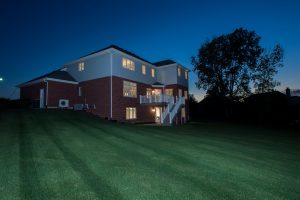 In many Chicago area homes, basements remain an afterthought. Award-winning homebuilder Gallagher and Henry, however, continues taking that convention to task…

“The walkout and lookout basements we can offer our homebuyers provide them added living space that can be customized to their specific needs,” Gallagher & Henry principal John Gallagher said.

In fact, existing Gallagher & Henry homeowners have turned these often “discarded” spaces of the home into a range of personalized retreats ranging from children’s playrooms to an in-law suite, man caves to mom caves, exercise rooms to home theaters.

While some buyers of new construction certainly elect to finish their basement at a later date, Gallagher & Henry works alongside its buyers to help define the space, including integrating any necessary plumbing or electrical elements, and to reach their desired result amid the homebuilding process.

“When our homebuyers have one of these premium walkout or lookout lots, it’s an exciting opportunity for them to leverage what’s present and transform that space into something creative, something truly for them,” Gallagher said. “It’s a blank canvas for our homeowners to make it whatever they want.”

“The walkout lots, in particular, give the feeling of an entirely new level of the home,” Gallagher and Henry sales manager Alice Burgston said, adding that finished basements also give an immediate boost to home values as well.

On Gallagher & Henry’s lookout basements, sometimes referred to as daylight or English basements, Anderson 400 Series windows sit at least 4 feet above the exterior ground. The windows ensure the presence of natural light and airflow, two difficult-to-find elements in traditional basements.

On many lookout lots, Burgston adds, Gallagher & Henry can place an exterior door from the basement to the rear yard. This enhances safety and provides an additional access point as well.